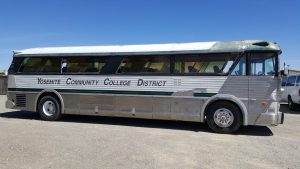 This Motor Coach Industries (MCI) model MC-5 was delivered new to Western Greyhound Lines in March 1964 as fleet number 2623. Only 300 model MC-5s were built, all in 1964. 211 of them were assigned to Western Greyhound Lines. 2623 was acquired by Yuba College in 1978. Its restroom was removed and the interior was reseated to 41 passengers. In 2000 the bus was acquired by the Yosemite Community College District in Modesto, CA where it was operated until 2011. that same year it was acquired by Pacific Bus Museum member Tom Harris who donated 2623 to the PBM in 2017.

Motor Coach Industries is a Canadian Corporation and the Greyhound Corporation acquired 100% interest in MCI in 1958. MCIs were built in Winnipeg, Canada. A large portion of their production went to Canadian Greyhound Lines . By 1964 MCI expanded their production to include a new a plant in Pembina, North Dakota. The model MC-5 was the first in a series of new MCI coaches built in the USA and delivered to Greyhound Lines in the United States.

The #2623 is in good mechanical condition. The exterior is in need of repainting. Plans call for the exterior of the coach to be painted in its original 1964 Greyhound livery.

To donate to the Special Funds account for this bus indicate #2623 on your contribution.

Click here to make a donation to the “Pacific Bus Museum” for this bus.